Cloyne is derived from the Irish word cluain which means ‘meadow’. This of course is only half a name. The original second element was derived from the word uaimh meaning ‘cave’, hence Cluain Uamha may be fully translated as ‘Meadow of the Caves’, or simply ‘Cave Meadow’.

The town is situated on a low hill just 100ft above sea level which is riddled with cracks and joints, some of which have been widened by erosion into underground passages and caves. One of the mysteries of Cloyne is how the major buildings – the Cathedral, Cloyne house and especially the Round Tower – have foundations built on solid ground away from known cave passages. Were there cave explorers all those centuries ago? 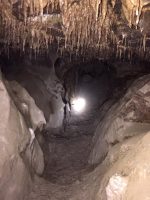 Eastwards, roughly in line with Rock Street, there is a low escarpment at about the 90ft contour. Here, about 250 yards east of Cloyne House, is the first or ‘Dry’ entrance to the known cave system. The second or ‘stream sink’ entrance is another 100 yards or so further east. This cave is the most extensive in County Cork, consisting of a very complex series of mazes over an area of 7 or 8 acres, where in excess of 3300 metres of the main passages have been actually surveyed. As caves go, it is not particularly well endowed with calcite formations. There are clusters of straw stalactites in a few locations while stalagmites are few due to flowing waters.

The caves are generally flooded for much of the year and are not accessible to the public. However surveys and explorations of the caves by members of the Cork Speleological Society have mapped grand features including the ‘Grand Canyon’, ‘Sphinx’, and the ‘Stepping Stone Chamber’.

Other remains of human activity are more numerous than one would imagine in this area. Ploughing has helped unearth some of the fulachta fiadh or Iron Age cooking sites in the parish, with eight in Kilmacahill alone.

Ringforts are Ireland’s most common field monument. In Cloyne there are between twenty and thirty earthen examples but the number is declining as the old traditions and folklore which protected them are being forgotten.

adapted from The Book of Cloyne / Leabhar Chluain Uamha compiled and published by Cloyne Historical and Archaeological Society (1977); edited by Padraigh O Loingsigh